Messi Lionel, Barcelona star player and one of Argentina’s best has written a brief condolence message to Sala’s family after an official announcement of his death. Messi showed considerable pain in the face of what many have described as a tragedy to Argentina football family.

Sala’s sister, Romina Sala made a passionate post announcing she would take care of Nala, Sala’s dog. “Nala is waiting for you, too…”, Romina posted a photograph of her brother with his dog.

British police said on Thursday, February 7, 2019, that a body retrieved from the wreckage of a crashed plane in the English Channel is Argentina-born football player Emiliano Sala, who plays professional football with Premier League side, Cardiff City.

The 28-year-old while flying from his previous club, Nantes in France to Cardiff in a plane piloted by David Ibbotson, he went missing over the English Channel on January 21, 2019.

The Air Accidents Investigations Branch (AAIB) revealed the operation had been carried out in “as dignified a way as possible” and the men’s families were kept updated throughout.

“The body brought to Portland Port today, Thursday 7 February 2019, has been formally identified by HM Coroner for Dorset as that of professional footballer Emiliano Sala, the police said.

Meanwhile, his club has also reacted to the tragedy. “We offer our most heartfelt sympathies and condolences to the family of Emiliano. He and David will forever remain in our thoughts,” Cardiff posted this statement on its website under Sala’s picture.

Mesut Ozil of Arsenal also said in a tweet; “No words to describe how sad this is. Thoughts and prayers go out to his family and also to the family of the pilot.” Reports say the pilot is yet to be found.

Sala’s agent raised £324,000 (371,000 euros) for a private search led by marine scientist and oceanographer David Mearns after the initial search was called off on the grounds that survival chances were slim.

Sala joined Cardiff for a club record fee of 15 million pounds ($19.43 million) from French Ligue 1 Club Nantes. He had played in France since 2012 and scored 12 goals for Nantes this season. 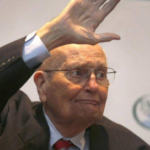 Congressman Who Served 11 US Presidents, Advocated Senate Be Abolished, Dies.

The tragic death of a young talented player as Emiliano is really devastating. To the bereaved family I extend my heartfelt sympathy. To Lionel Messi I urge you to be courageous and keep his legacy