The Banjul American International School (BAIS), an American-run school founded by a small group of American families has celebrated its Christmas Party in a special way.

BAIS was founded in 1984 with support from the US Embassy to offer an American and international standard educational program to children coming from the families of foreign diplomatic missions, NGOs, and global and local businesses, National Telegraph gathered.

BAIS joined hands with other stakeholders, including the Parent Teachers Association, on December 7, 2019, to organize a fun-filled  Christmas party at the school esplanade at Atlantic Boulevard, Bakau, west of Gambia’s capital city of Banjul.

Children of all ages; from toddlers to teenagers and their parents ahead of the event, had a photo up moment from Father Christmas himself before looking forward to some festive fun and merrymaking.

Fun-filled activities with children playing slip ‘n’ slide, taking photos with Santa, singing along the musical dancing chairs (Jingle Bell, Jingle Bell, jingle all the way…) were among the best in recent times in the precinct, one of the parents told National Telegraph.

“The feeling I had, took me back some fifteen to twenty years back when I’ll anxiously get dressed in my newest and favorite outfit to see Santa and mingle away with friends, funny to say that the feeling is still new.”, an attendee said.

There was face-painting, food! (My favorite was the Christmas-themed cupcakes), Gingerbread house decoration, and many many more! I could swear I was a kid again just enjoying the moment. My favorite part was the Raffle Draws, too bad I didn’t win any (sighs). Well, maybe next year I’ll be lucky, an excited parent said.

“The idea is well having a good time and to open the doors to the community, so other people can come and see the school.” Dr. Helen, leader of the Parent Teachers Association said.

Party-goers created their own lasting memento of the day. BAIS also rigged up a photo booth with lots of props. And of course, before the day was over each child met Father Christmas to receive Gingerbread man cookie, National Telegraph has been told.

A raffle draw from the event’s sponsors including Timbooktoo, Coco Ocean Resort and Spa, Brussels Airlines, Yosh Restaurant, etc, wrapped up the party.

Every child should be able to enjoy the wonder of Christmas Day and BAIS did absolutely well in that regard! Merry Christmas and a Happy New Year from everyone at Banjul American International School!, 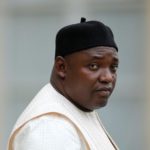 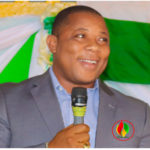