The Most Reverend William J. Waltersheild, Auxiliary Bishop of Pittsburgh, a city in the US State of Western Pennsylvania has celebrated Chrism Mass in the Diocese of Wheeling-Charleston, West Virginia precisely at the Basilica of the Co-Cathedral of the Sacred Heart, Charleston, Monday April 15, 2019, Fr. Aloysius Boh told National Telegraph.

The Most Reverend William thanked God for the gift of Priesthood and also thanked the Priests for accepting the call and enjoined all priests to always think about what gave them the initial kick to join the call.

He also said Priests are also humans and when they pray the Rosary, they also recite the words; ‘Pray for us sinners’, adding that they however invoke Christ at Mass and with the words of consecration, Christ becomes present at the altar.

Another Chrism Mass held on Tuesday April 16, at the Basilica of St Joseph, Wheeling, West Virginia with His Grace Archbishop William Lori, Archbishop of Baltimore and Apostolic Administrator of the Diocese of Wheeling-Charleston, WV Fr. Boh confirmed to National Telegraph.

Fr. Boh also said the major relics of St John Vianney, his incorrupt heart was on display in front of the altar before, during and after the Mass for veneration; (St John Vianney is the patron Saint of all Parish Priests), he added.

Fr. Aloysius Boh of the St Bernadette Catholic Church, Hedgesville, West Virginia who attended the Mass with Bishop William J. explained to National Telegraph that Chrism Mass is one which the Bishop concelebrates with Priests from various parts of the diocese. During this Mass, the Bishop consecrates the sacred Chrism and blessed the other oils; oil of the Sick and the oil of Catechumens, he said.

He also explained that this Mass is among the principal manifestations of the fullness of the Bishop’s Priesthood and is considered to be a sign of the close bond of the Priests with him.

It is with the sacred Chrism that Priests are consecrated at ordination and with Chrism, the newly baptized are anointed and those to be confirmed are signed. It is with the Oil of Catechumens that Catechumens are prepared and disposed for Baptism, explained Fr. Boh

He concluded that with the Oil of the Sick those who are ill are comforted in their infirmity, adding that during the Chrism Mass the Priests renew their ordination vows. 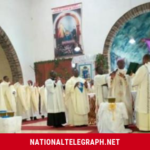 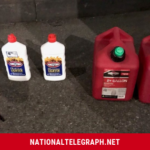 After Notre Dame, Another Renowned Cathedral Saved From Fire.