Three persons have perished in a fatal road accident that occurred early Tuesday October 15, 2019, National Telegraph has been told.

The accident occurred in Pougue, a locality situated some 15km away from Boumnyebel in the Nyong and Kelle Division of the Centre region.

Sources say the accident occurred when a lorry had a head-on collision with a private car. Eyewitnesses say it was caused by over speeding, but didn’t mention who was speeding.

This accident comes just 24 hours after another had occurred at Boumnyebel on Monday October 14, 2019, killing a military officer.

In a related development, a truck belonging to CONGELCAM SA, leader in the importation, distribution and sale of sea products in the Central African country of Cameroon, was also involved in a deadly accident in which a dozen people are feared dead.

Reports say the truck has been involved in a head-on collision with a military truck at Sombo, a town in Nyong-et-Kelle Division in Cameroon’s Centre Region, some 71 kilometers away from Edea.

Road accidents have become phenomenal in Cameroon, mostly resulting from poor road infrastructures, reckless driving and bad state of most automobiles that bribe their ways into major highways with permit from government services. 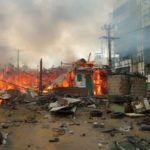