The Bishop of Mamfe, a Diocese in the restive South West Region of the embattled Central African country of Cameroon has written a letter in connection with an ongoing armed conflict in the country’s two English-speaking regions.

Mgr. Andrew Nkea in a Pastoral Letter dated Saturday November 9, 2019, puts christians into tears after a soul-searching letter on some activities that have greatly affected his Diocese. Below is the full letter National Telegraph obtained;

(Pastoral Letter to all the Christians and People of Good will in the Diocese of Mamfe about the recent Kidnapping of Priests in Central Ejagham Area, in Mamfe Diocese)

My dear People of God,

When the Diocese of Mamfe was created on the 9th of February 1999, it was a moment of grace and great joy to all the people of God in Manyu Division, Lebialem Division and Nguti Subdivision in Kupe Muanenguba Division whose territory corresponds to the territorial circumscription of the new Diocese of Mamfe.

It is an indisputable fact that   this territory of the Diocese of Mamfe has known a lot of spiritual growth, economic development and social progress since the creation of the Diocese.

This year 2019 marks exactly 20 years since the creation of our beloved Diocese of Mamfe, and again, it is a moment of immense gratitude to God for all that we have achieved so far.

We render  thanks to God for the blessings he showered upon Bishop Frnacis Teke Lysinge, pioneer Bishop of the Diocese of Mamfe for the first fifteen years of the Diocese, especially for the solid foundation he laid and the way he sacrificed himself for the smooth take off of the Diocese.

I also thank God for the short time I spent with him as Co-Adjutor Bishop and for the blessings he has bestowed upon me during the last five years that I have led the diocese of Mamfe as the Local Ordinary. We have every reason to thank God. However, it is clear that we could not organize a grand celebration of  the 20th Anniversary of the Diocese because of the prevailing socio-political crisis that has rocked the southwest and northwest regions in the past three years.

In all these difficulties, the priests stood with their people and made sure that they consoled and comforted them through the words of the Gospel and the daily celebration of the Sacraments. Through the heavy gun shots, the fire and the dangers to life, our heroic priests remained among their people as true shepherds who would never abandon their sheep in times of danger.

Like Jesus the Good Shepherd, the priests of the Diocese of Mamfe were ready at all times to “Lay down their lives for their sheep”(Jn.10:15). This pastoral consciousness and commitment even ended up in  the tragic death of Rev. Fr. Cosmas Ondari Omboto, the Parochial Vicar of Kembong Parish. Yet the priests did not feel discouraged and they did not abandon their flock, not even in Kembong.

I am addressing this pastoral letter to all of you about some unfortunate recent events  that have happened in our Diocese in the last two weeks, especially in the Central Ejagham Area. In the morning of  20th of October, 2019, some unknown Gunmen who claim to be members of the restoration forces of Ambazonia, abducted Rev. Fr. Felix  Sunday, a Nigerian “Fidei Donum” Priest and Parish priest of Afap, when he had just celebrated Mass in a Mission station and was returning to Afap for the second Mass.

They kept him overnight and only released him on Monday the 21st of October, 2019. On that same Sunday, 20th October, another group of young men with guns waited on the road between Ewelle and Ajayukndip to abduct the Assistant Priest of Kembong Parish, Fr. Gabriel Romeo Foukwa, but the Angel of God intervened and Father missed the road and arrived his parish through a different route.

The same fateful day, 20th October, there were plans by again another group of armed young men to kidnap the Parish Priest of Eyumojock, the Rev. Fr. Emmanuel Dzesinyuy in Tabor. But the innocent priest celebrated Mass without knowing anything and left before his kidnappers arrived.

On Friday, 1st November, 2019, four gunmen went into the Presbytery of Kembong Parish where the young Fr. Cosmas Ondari was brutally murdered, and surrendered the parish priest and his assistant at gunpoint and requested that they must be given one million Francs CFA before they are released.

Eventually they released them without any ransom paid. What was painful about these abductions is that some of the Christians knew either hours or days before hand that this would happen and never warned the priests.

What is the crime of these priests? The young men who have been perpetrating these heinous acts against the priests claim that they are venting their anger against the Bishop of Mamfe because he attended the Grand National Dialogue in Yaounde, and that all those who attended the Dialogue from Manyu must pay a fine of 500.000 frs CFA each.

Therefore, they told the Priests that their target was the Bishop and until he paid his fine, they would track him down and kidnap him. The truth is that I don’t have this kind of money to pay to anybody.

It is clear that it is not only the priests who are suffering in the hands of some of these armed boys in various villages, but the entire population is not getting it easy in their hands either.

The boys claimed that they took up guns to protect the population and it is a great contradiction that these guns are now being used to terrorize the very population they claimed to be protecting. We all joined to decry the brutality of the military against the people but now it is our own children who have turned against their own people and they think it is normal?

Touching the anointed one of God never goes without a guilt and this guilt follows such a person right into the grave. The priest is a man of God and all those who lay hands on such an anointed incur a malediction upon themselves.

The gospel of John tells us that when the soldiers came to arrest Jesus in the Garden of Gethsemane and he asked them who they wanted, at the mention of his Name, “Jesus of Nazareth”, they all went back and fell on the ground.

It did not dawn on them that they were going to commit the most atrocious act in history, by laying hands on the Son of God(cf John 18:1-10). When they brought Jesus to Pilate and questioned him, Jesus ended his dialogue with Pilate by stating that “the one who handed me over to you has the greater guilt”(Jn.19:11).

Let us not make the mistake of the killers of Jesus who said to Pilate, “Let his blood be on our heads and on our children”. These are words that carry heavy and very lasting consequences.

The Code of Canon Law states the following sanctions upon those who lay violent hands upon clerics and religious:  “A person who uses physical force against the Roman Pontiff incurs a latae Sententiae Excommunication reserved to the Apostolic See…”(Can.1370 par.1);  “One who does this against a Bishop incurs a latae sententiae interdict and if a cleric, he incurs a latae sententiae suspension”(Can.1370 par.2); “A person who uses physical force against a cleric or religious out of contempt for the faith, or the church, or ecclesiastical authority or ministry, is to be punished by a just penalty”(Can.1370 par.3).

This is the teaching of the Church and it is important that all those who violate these laws either knowingly or unknowingly, be aware of the consequences. Because of the constant threat to the lives of priests coming from the very people they are risking their lives to serve, I have decided on the following action:

I have withdrawn all the priests from the Parishes of Kembong, Ossing and Eyumojock and they will be out of the Parishes till further notice. This will hold good for any other parish where the people decide to harass their priests.

These boys who harass the priests are from these villages, and until the population dialogues with their children and give me a written guarantee  of the safety of the pastors who work for them, the parishes will remain without pastors.

I have suspended all development projects in these parishes because the very people for whom the projects are meant, have made the areas unsafe for any development, and even those who work on these projects are not safe.

I appeal to the boys who have caused this embarrassment to the entire Christian community and their villages, to change their hearts and work towards the growth and progress of their various communities.

They should collaborate with their village and Christian leaders, so that their priests can return soonest to their parishes and continue to work in peace. I appeal equally to those who give them orders to do such acts against the people, to stop from pushing these our brothers into calling malediction upon themselves.

As I round up this letter, I invite all the Christians to appreciate and value their priests, especially for the services they render to them. Your priests love you and they are ready to continue serving you with all their hearts, their minds and their energy.

Yet in these prevailing unfortunate circumstances, each priest can sorrowfully look at his people and echo the adapted words of the Reproaches during the  Good Friday Liturgy saying:

“My people, what have I done to you? How have I offended you? Answer me.I pray for you everyday and celebrate Masses for you; but you have wished evil on me.In the confessional I bring you freedom from sin; but you have led me to captivity with your guns.

Through Caritas I bring food to your hungry, bring medication to those who are sick, and bring the pregnant women to the hospital; but you threaten me with death. I have suffered with you to protect you, cried with you for the dead; but now you turn round to destroy me.

I have built churches for you, presbyteries, schools etc, but today you pull me out of the mission house and turn me to an Internally Displaced Person without shelter. My people, what have I done to you? How have I offended you? Answer me.”

In conclusion, I want to assure all the Christians of these parishes of my pastoral solicitude and my prayers. Like the Chief Pastor of the Diocese of Mamfe, I wish to borrow the words of Christ and pray for these boys who are disturbing our priests and say, “Father, forgive them, for they do not know what they are doing”(Luke 23:34).

I will never stop loving the people of Mamfe Diocese and giving my all for them. There is no family without difficulties, but the Christian faith helps us to solve our problems peacefully without violence and move ahead as one family.

May Mary the Queen of Peace intercede for us and may God bless the people of Mamfe Diocese.

Given in Mamfe, this 9th Day of November, 2019, the Feast of the Dedication of the Lateran Basilica. 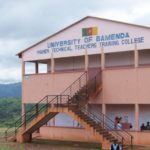 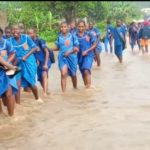 Cameroon: This Is What Has Happened To Top Bamenda University Professor!