A military court in Yaoundé, Cameroon’s capital has adjourned the case of ten (10) Anglophone pro-independence leaders. The suit that held Wednesday, February 20, 2019, file by the state of Cameroon has been adjourned to Thursday, March 7, 2019, National Telegraph has held.

In the high moments of the court-martial, the State presented copies of identification cards of the defendants, our source said, adding that the Defense Counsel rejected it, citing photocopies aren’t proof of nationality.

“Only certified copies accompanied with the originals of the document can be considered”, the Defense said, arguing that only a certificate of nationality can confer nationality.

The Defense is said to have submitted documents from the United Nations High Commission for Refugees (UNHCR), corroborating the defendants are refugees and asylum seekers, National Telegraph has learned.

A recces would later be called; National Telegraph is told. The judge came back and confirmed the accused hold Cameroonian nationality. He also confirmed the defendants are refugee and asylum seekers but the military court has the jurisdiction to try them, Francis Ajumane, a Journalist at the courtyard confirmed.

The defense counsel opts to appeal against the ruling at the Appeal Court which the judge rejects, forcing the lawyers to stage a walkout, Francis added.

A legal mind at the court said; the judge said in his ruling inter alia; documents as to their Nationality have been admitted, four (4) of the accused are refugees, six (6) have applied for refugees’ statuses, the fact that the accused persons have refugees’ statuses does not give them any immunity and that the Yaoundé military court is competent to hear the matter.

Based on these, the judge asked the Court Registrar to read the charges to the accused persons, an eyewitness said, adding that Barrister Etta Bessong, one of the Defense Lawyers objected, telling the judge that since it’s a ruling, the Defense would appeal.

Reports say, as the judge refused and insisted that the accused persons take their pleas, all Lawyers (close to 100) walked out the court hall.

The leaders, we are told were instructed not to plea to any charge without their Lawyers. The judge has also banned the defendants from wearing hats and holding wands in the next hearing.

Justice Ayah Paul Abine, one of the lawyers entering an appearance on the court case of the Anglophone pro-independence had reviewed the special file from the United Nations High Commission for Refugees, a source inside the military court in Yaoundé, Cameroon’s capital where the trail took place has told National Telegraph.

The accused persons Sisiku Julius Ayuk Tabe and nine other Southern Cameroonian leaders abducted in Nigeria a year ago, were to show proof that they were refugees and asylum seekers in Nigeria. A source has now confirmed the special file from the UNHCR carrying the proofs has been presented in court.

The leaders are facing terrorism-related charges. Sisiku Ayuk Tabe Julius and nine others were arrested in Nigeria and extradited to Cameroon under circumstances that have been considered illegal.

President of the Federal Republic of Ambazonia as he is now being called is being held at the Kondengui Principal Prison in Yaoundé where he and other close aides are facing charges of Terrorism, amongst others.

Armed groups have emerged battling with pro-regime soldiers as they aim to uphold the creation of a new country; Ambazonia. Ambazonia is an outlawed country in which the majority of its residents; the English-speaking regions are seeking to create.

The Biya administration has blamed the insurgency on Sisiku and others. The proceeding was witnessed by diplomats from the US, and representatives of the European Union (EU). 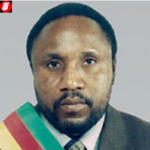