The only reasonable damage that most Cameroonians would see and have seen from the SONARA fire incident is the display of a visibly burning oil refinery plant.

No wonder the government of the Central African country of Cameroon says the damages occurring from such a huge fire are insignificant.

The real truth is that the physical damage of the plant is enormous according to an official statement from SONARA Management despite attempts by top Ministers in Yaoundé to under-report the material, financial and economic damages the incident has on the government.

The government is fighting to contain an armed conflict in the two English-speaking regions of the North West and South West where majority of its inhabitants are demanding a separate state called Ambazonia. Consequently, she must defeat any psychological issue that would make it appear the government is economically weak.

In all of these, is the health and environmental damages that would hit the populations of Limbe where the incident happened as well as Buea, capital of the South West Region and other surrounding towns like Tiko, Ombe and Mutengene.

Under normal circumstances, the government through its Ministries of Environment, Nature Protection and Sustainable Development and Health would have immediately put out a sustainable plan to contain present and future environmental and health hazards that would arise from the incident.

In the event of the burning of an oil refinery, science holds that dangerous pollutants are emitted into the air causing air, water and land pollution. The physical debris that are scattered from the kind of explosion noticed at SONARA would obviously settle in the rivers, streams, beaches, community water catchments and even regular water supply tanks, on zincs where some inhabitants collect water from the rains.

Some of these debris would also have settled on plants that would be eaten by both wild and domestic animals. In the rivers and in the beaches, fishes would eat some of these dangerous debris as plankton.

Even locals would harvest plantain and other leaves for regular delicacies. Limbe in itself is a touristic destination of unparalleled attractions. Only its zoo, beaches and botanical garden speak volume.

There’s no gainsaying that the thick smoke that came out of and is still coming from SONARA would cause severe lung diseases as well as other related ailments from air, water and land pollution.

Lung Diseases and Respiratory Problems with diseases such as asthma and chronic obstructive pulmonary disease (COPD) can be caused or triggered by rising levels of air pollution.

According to Air Quality Information for the Sacramento Region, long-term exposure to polluted air can have permanent health effects such as; accelerated aging of the lungs, loss of lung capacity and decreased lung function. Development of diseases such as asthma, bronchitis, emphysema, and possibly cancer would shortened life span.

High air pollution levels can cause immediate health problems including; aggravated cardiovascular and respiratory illness, added stress to heart and lungs, which must work harder to supply the body with oxygen, damaged cells in the respiratory system.

People in these groups may experience health impacts at lower air pollution exposure levels, or their health effects may be of greater intensity, the organisation states. According to a National Telegraph finding, the huge sound that many thought was a bomb explosion or like an earthquake must have tinkered the firmness of some houses.

Many other inhabitants must have sustained real and lifetime injuries from trauma and other psychologically related issues. Many houses in the precinct were also partially damaged.

Yet, neither the central government in Yaounde nor local and managerial authorities where the incident happened have issued a single statement addressing the environmental and issues which are supposed to be the most crucial thing from that incident.

According to the UN, approximately 7 million people worldwide die prematurely each year from air pollution. Apart from this, water pollution is also causing many deaths.

Direct exposure to toxic through drinking water can be a source of exposure to chemicals caused by nutrient pollution. Drinking, accidentally swallowing or swimming in water affected by debris like those from SONARA can cause serious health problems including: Rashes.

Contaminated water can cause many types of Diarrhea including Cholera, and other serious illnesses such as Guinea Worm Disease, Typhoid, and Dysentery. Water related diseases cause 3.4 million deaths each year.

The inhalation of soil particulate matter and the ingestion of contaminated food can potentially result in serious conditions, of which the most common include: Cancer, including leukemia caused by the contact with soils contaminated with chemicals (e.g. gasoline, benzene), other health sites have noted.

Diseases due to Land pollution or the lethal effect of chemicals in the soil affects human health. Burning polyethylene waste releases toxic gases such as carbon dioxide, carbon monoxide and dioxins. Thereby, it increases the risk of respiratory, skin, stomach diseases etc.

According to a National Telegraph finding following an interview with a medical doctor in Cameroon’s South West who prefers not to be named, Limbe and its environs are now completely dangerous for any tourists and the entire population.

In Yaounde, Cameroon’s capital on Sunday June 2, involved ministries, heads of the corporation dismissed fears the incident may cause shortages.

The Minister of Communication, Rene Emmanuel Sadi said the investigations have been opened to further determine the real cause of the fire that destroyed four of the 13 production units at SONARA. 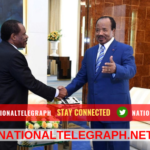