Penn Terence Khan, a teacher and activist currently serving a jail term at the Kondengui Central Prison, a detention facility in the Cameroonian capital city of Yaounde as a result of the Anglophone Crisis would be facing another problem bigger than his jail term, pundits have said.

In a letter addressed to The National Telegraph, published by many social media platforms, Penn said an entire story published by the outlet was biased, unprofessional and clearly an attempt to tarnish his image and person as an educator and a Human Rights Activist.

“This outrageous outing of yours put my life and that of my family in grave danger. I will not be libeled by you and your paper…” parts of the letter read.

In the article, National Telegraph reported that “Our on-the-spot source from the high security detention facility said Penn and one other inmate on Wednesday April 10, 2019 at Quarter One, a popular cell in the prison received serious beatings before prison authorities intervened.”

Penn’s letter was provoked after National Telegraph specifically stated that he was beaten by some concerned Anglophone inmates angered by the accusations that some of their inmates were organizing kidnappings from jail and Penn was said to be a ringleader.

Penn claims that National Telegraph wrote the story without contacting him or his family members and therefore qualifies that as Bad Journalism. Penn went on that “Journalism isn’t about getting up from one’s bed and writing imaginations flying in your head”

Penn again claims that “Your constant use of your paper, The National Telegraph to spread unverified rumours about people who are reachable and available and are not given the opportunity to give their own said of the story is not only naive, awful, hurting but highly unprofessional”

The Publisher and Editor-in-chief of National Telegraph, Eric Tataw Tano has now added his voice to pundits that Penn Terence is definitely looking for a problem bigger than his jail term by trying to attack a very concise and objective media organ as The National Telegraph.

Eric Tataw said he respects Penn and sympathizes with his predicament as he’s facing an unjust jail term and pledges to always support him but maintains that he wouldn’t ignore slanderous letters against his news organ and professional panache.

Eric Tataw said his story on Penn is authoritative and not imaginative. The Publisher went on that apart from being authoritative, the news item is fair, balanced, objective, concise, precise and meets all Journalism tenets.

National Telegraph is respected and cherished because of the quality of facts in our stories. Those who doubt the Penn story can call relatives and friends in Kondengui, Eric said, adding that Kondengui isn’t in space.

We stand by our story and wouldn’t publish any rejoinder for writing the truth, Eric said, adding that there’re three (3) points to check facts that would make Penn look totally naive and unschooled about professional Journalism.

First Fact; was Penn Terence beaten in Kondengui on Wednesday April 10, 2019? The Answer is Yes. Second Fact; was Penn beaten because Anglophone inmates suspected him of organizing kidnappings from jail? The Answer is still Yes. It may be mere accusations but that wouldn’t disqualify the story.

The Publisher of National Telegraph also flattened Penn’s claims that he didn’t contact him before publishing the story by saying that in the case of a breaking and running story, Journalist always publish the stories and allow an opening for responses.

Eric Tataw cited the case of Omar al-Bashir, the President of Sudan that was reportedly kicked out by the military. Journalists published the story based on the information available without necessarily getting to Omar al-Bashir, he said.

If al-Bashir later puts out a statement, it would be published and that wouldn’t mean previously published information aren’t true, the Publisher said while smiling.

In the Third Fact; the concluding paragraph of our story said Penn is yet to make a statement on the matter, meaning National Telegraph was still expecting that after Penn must have come out of the danger from the serious beatings, he would make a statement that we would have published, Eric Tataw echoed.

I think Penn has been misled to write that very naive and empty letter by a few misguided social media spooks who know nothing about Journalism and the information verification capacity of National Telegraph, the Publisher went on.

It’s even very embarrassing that Penn didn’t deny any line in our story but was instead talking about an ex-Minister that was never mentioned in our story. He even claimed that we’ve been publishing unverified information about people but also failed to point at one example.

We at the National Telegraph have a penchant for Investigative Journalism and we pride self in reporting our facts unadulterated. Penn must have noticed that. Reason why he’s the first person who’s writing a so-called rejoinder to National Telegraph since the creation of National Telegraph in 2013 despite publishing thousand of stories both on tabloids and online.

Going forward, Penn should have been schooled that a Rejoinder is served to a news organ by a bailiff or at best, he would have sent it to us through our email or contacted us through our phone number found on our official Facebook page not circulating it on social media like the many detritus and fake declarations always found online.

We at the National Telegraph have never published any unfounded stories about a person, animal, plant, place, thing or event. We therefore owe Penn no Rejoinder not because he didn’t send it to us directly but because our story is authoritatively true with facts, balance, objectivity and without prejudice.

We expect Penn to instead apologize to us for trying to vilify us and tell us his own part of the story at his earliest convenience. However, we also urge him to take the matter to any court if he feels hurt and we would be ready to pay any sum ordered by the court because we wouldn’t publisher any Rejoinder from Penn for publishing a true story.

Penn is a brother. He’s an Activist like a Journalist fighting for various forms of injustices. I would support him in whatever way I can but wouldn’t tolerate him if he ever at any time crosses lines when it comes to National Telegraph or my professional life.

This message is also an extension to friends and family members, Eric Tataw said, concluding that we can make mistakes but wouldn’t apologize for mistakes we didn’t make. 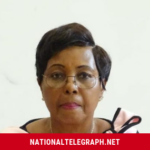 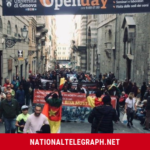 The truth never dies, I will remain the fan of National Telegraph as long as you keep it right Eric Tataw. I really enjoy your sincerity. You will reach your destination, any stumbling block on your way be it spiritual, powers or physical power, whether from the air, land or sea shall backfire in Jesus name