The cadaver of a top Cameroonian Army General of the Cameroonian would be removed from the Yaoundé General Hospital Morgue today; Wednesday, February 20, 2019, for a week-long burial program, National Telegraph has learned.

General Benoit Asso’o Emane died in the night of Wednesday, January 16, 2019, at the CNPS Hospital in Yaoundé, Cameroon’s capital, where he had been hospitalized for over two weeks, family sources told National Telegraph.

Benoit Asso’o Emane was Commander of the Yaoundé Military Headquarters. Military Sources say his death had earlier been announced on January 7 but was later debunked by Family members.

Born on June 21, 1936, in Essong village, South Region of Cameroon, Benoit joined the then French Army on November 6, 1959, and later moved to the War College in Yaoundé where he graduated as Lieutenant in 1961. He would be buried in Essong, sources say. 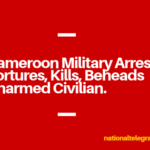 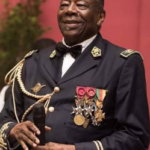