A top Cameroonian politician has been spotted in Maryland, a United States State close to the Federal capital of Washington District of Columbia, National Telegraph is told.

Simon Achidi Achu, first Anglophone Prime Minister of Cameroon who served from 1992 to 1996 and was a leading member of the Cameroon People’s Democratic Movement (CPDM) is presently in Maryland, National Telegraph has been hinted.

According to our source, the ex-Prime Minister who was elected to the Senate in 2013 entered the US since February 2019. Our source didn’t give us any further details whether he came for medical checkup or vacation but stated that the ex-PM’s family says he wouldn’t be returning until most likely after the armed conflict.

There’s a deepening armed conflict that has broken out in the two English-speaking regions of the North West and South West of Cameroon with Anglophone Militias battling regular army to create a new state called Ambazonia.

During this warring period, many English-speaking Cameroonians, including children and women have been killed, many houses torched, entire villages destroyed, many jailed with an alarming number of refugees in Nigeria and elsewhere.

Most, if not, all English-speaking elite have continuously ignored discussions on the gory and atrocities committed by the Cameroon military, amongst them is the ex-Senator whose area has been hardest-hit by the military.

Most of these politicians especially those of the ruling CPDM party of President Paul Biya are unable to go back to their villages. Reports say all of them now have permanent residences in Yaoundé, Cameroon’s capital, others in Douala and other French-speaking cities.

Ironically, they would always claim all is well but can’t spend a single night in their hometowns because of provisos from Anglophone militias. The move by Simon Achidi Achu’s family to have him resettle in the US is a clear sign that the newly created Anglophone Peace Commission is a failure.

Some Anglophone elite under the banner of a CPDM Member of Parliament, Enwe Francis Abi, member of parliament for Momo West constituency formed what they dubbed; The Anglophone Peace Commission.

This Commission is one of many commissions formed by both government’s orders and private initiatives, yet, none of the founders have actually ever agreed there’s an Anglophone Problem. 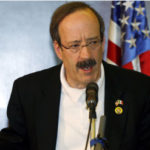 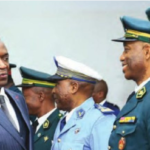 If Achidi Achu is coming to the US for medical check-up it means that for all the years that he has been in the center of power, he could not see to it that a hospital be built in Santa, his local constituency in Cameroon where he can get medical check-up.

Once we know where he is hiding in Maryland, we will determine what to do next, and that may include filing a lawsuit against him for conspiring with Paul Biya to carryout genocide in Ambazonia. His name is on the list of those to be held accountable.

Please, the interim government must prepare a case file with the names of these criminals so that once they step foot in the United States, they are immediately dragged to court. That also means we keep our agents at the various points of exit from Cameroon, so that their moves are monitored. Actually, the interim government and the top leaders of the groups should prepare a list of these criminals and submit to the US Embassy in Cameroon stating clearly that there is a pending lawsuit against them.

If you recall, Ekema Patrick went to Yaounde and all of the western Embassies he approached, refused to give him a visa because of our interference. Then he sneaked into Nigeria and by the time he got to Abuja, the western Embassies again were contacted and he was turned down when he showed up.

Instead of our activists constantly quarreling among themselves, these are some of the things they should be pursuing. Can any of our activists step foot in Cameroon today without being arrested at the airport and never to be seen again? Please, you guys should wake up.

Well if its bc yr activist are persecuted in Cameroon , then you gave the right to persecute any of Cameroon’s govt members too