Pro-holocaust statements made by a Cameroonian top government official continue to inhibit Cameroon’s image both home and abroad. In the recent rounds of concerns expressed to Israel, a Cameroonian based in American has sent an email to the Israeli Embassy in Cameroon, National Telegraph has been told.

The document detailing the relationship between the Holocaust on Israel and the war on the populations of the North West and South West Regions of Cameroon aka Ambazonia trapped in an armed conflict comes hours after the Israeli Embassy released a statement demanding apologies from the Cameroon government over anti-Semitic commentaries made on state-run television.

Based in Silicon Valley, California, USA, Cedric Yengo, President of Leaders Of Tomorrow International (LOTI)-Cameroon an NGO specialized in training youths in computer know-how, noted in the email that Ambazonians sympathize with Jews for losing 6million of their grandparents and cousins during Hitler’s genocide.

We are proud of the Israeli Embassy’s condemnation of Minister Momo’s anti-Semitic statements. All nations of the earth abandoned the Jews during their genocide, parts of the email said, adding that every nation abandoned Ambazonians, including Nigeria whom they consider as brothers even abducted and repatriated their leaders to Biya, President of Cameroon.

Linking up the issue to an ongoing armed conflict in the English-speaking regions of Cameroon in which soldiers are said to have been shooting and killing unarmed civilians with impunity, Cedric likened Biya to Hitler.

All the nations of the world were concerned about the Jews but none took action. Everyone is concerned about Ambazonia but no one is taking action. We are pleading on the nation of Israel to impose on the Biya regime to stop the war in Ambazonia, another part of the email reads.

Tension has mounted between Cameroon and Israel. The Israeli Embassy in Cameroon on Monday, February 4, 2019, issued a statement condemning anti-Semitic declarations by Barrister Jean de Dieu Momo, Cameroon’s Minister Delegate at the Ministry of Justice, Keeper of the Seals.

During Actualité Hebdo, a TV program aired on state-run media; Cameroon Radio and Television (CRTV) every Sunday 6:30 PM, the Minister made far-reaching declarations on the Jews.

On the TV program dated Sunday, February 3, 2019, Momo stated that the Jews deserved Holocaust meted upon them by German leader, Hitler, because of their arrogance.

This statement has been considered by Israel as disdained and a big disappointment in terms of the relationship between Cameroon and Israel especially as world and Cameroon are just coming from commemorating International Holocaust Remembrance Day on January 27, 2019.

In order to squelch the tension from the release from the Israeli Embassy, Cameroon’s Minister of Communication, Emmanuel Rene Sadi on the same Monday, February 4, 2019, released a communiqué, apologizing to the Israeli Government while stating that Minister Momo spoke as an individual. 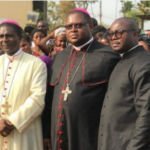 First, Biya and his supporters massacred Ambazonians, then they say “you know what, we are now a superpower. We have paid enough money and deserve it.”

This got them so ambitious that they venture to threaten on killing the mighty US ambassador to Cameroon Mr. Peter Henry Barlerin. The American government snores and that was it, they ran off like dogs.

They went back and embarked on the ethnic cleansing of Ambazonians in front of the eyes of the whole world, and no one says a thing. Again Biya said, “why did we run when the American government snored? We are equal partners”.

Then Biya said it’s time to show the world that LRC is untouchable, not even the mighty USA or the UN, OAU, EU can dare.
LRC strong man the diaper king said it’s time to resurrect Adolf Hitler. They say they are so good at keeping the world in cheek that it’s time to teach other African nations how to handle business and they choose one of the worst evil on earth, the European Jews Holocaust as the model and way forward for their ethnic cleansing in Ambazonia has not yet hit six million.

One way or the other, the world will be confronted with the evil of Biya, it’s just a matter of time. Things like this don’t just happen for nothing, these are not random events. These are all the signs of what is coming and will shock this world.