The students say the demonstration is in solidarity with the death of one of their lecturers who was shot and killed by unknown gunmen under unclear circumstances.

Molona Stephen, a lecturer at the Department of Law was killed Monday, January 13, at about 7 PM GMT+3  as he was returning to his residence from lecturers.

The students went to Parliament calling for justice to be taken accordingly and have promised to continue with the protest until justice takes place.

The students, mostly from the Department of Law gathered in front of the administrative block, carrying placards, demanding government speeds up investigations into Molona’s death. 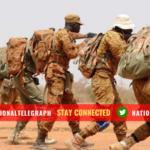