The dead body of a man who early Saturday, December 7, 2019, drove his car into the Indian Ocean in Mombasa, a coastal city of Kenya along the Indian Ocean, has been retrieved.

The saloon car that plunged into the Indian Ocean on the Mainland side of the Likoni channel has also been removed, a statement by Kenya Ferry Services (KFS) confirmed to National Telegraph.

“Our hearts, thoughts, and prayers go to the family and friends of the lost lives. We will keep updated on the progress of the recovery,” KFS has said.

The Kenya Ferry Services also revealed that John Mutinda drove his vehicle into the sea at around 4:20 a.m. (1:20 GMT) after efforts to slow him down and stop were foiled.

John is said to have had a family fracas before the incident described by many as unfortunate. The family of the deceased say he told his wife that he had an urgent appointment, his wife Ruth Mueni tried to hide the car keys to no avail.

The KFS said its response rescue boat responded immediately, together with Kenya Navy, police and other agencies, adding “The occupants in the car have not yet been established.” Investigations have since then been launched to establish the details of the incident. 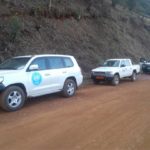 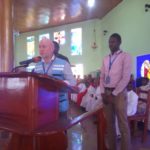 The Untold Story Of The Arrest Of Two Ghanaian Spiritualists!