The government of the Federal Republic of Nigeria has for the first time since the arrest in Nigeria and repatriation to Cameroon of ten Anglophone Pro-independence leaders made an official move, National Telegraph has confirmed.

The Buhari administration before Thursday, February 7, 2019, had never made any move concerning the case of Sisiku Ayuk Tabe Julius and nine others who are being held at the Kondengui Principal Prison, a detention facility in Cameroon’s capital, Yaoundé.

However, reports say Atiku Abubakar, a Nigerian politician who served as the 11th vice-president of Nigeria from 1999 to 2007 under the presidency of Olusegun Obasanjo and a member of People’s Democratic Party (PDP) who’s now vying for the Presidency has accused incumbent, Muhammadu Buhari of illegally repatriating refugees.

According to Barrister Fru John Nsoh, head of the legal team of Sisiku and Co. who spoke to National Telegraph, the last time he was in Nigeria, he read from several Nigerian tabloids that Atiku has been talking about Buhari’s illegal deportation of Anglophone leaders, describing them as refugees.

For the first time ever, the Nigerian High Commissioner in Yaoundé sent a representative to the hearing of Sisiku and Co on Thursday, February 7, 2019, at the Yaoundé military court, Barrister Fru said, adding that the Buhari administration must have reacted to Atiku’s concerns.

Barrister Fru went on that the Sisiku Case would also play a huge role in the geopolitics of the upcoming Presidential elections. He opined that Buhari who would be running for reelection on the ticket of the All Progressives Congress (APC) has an uphill task to convince naturalized voters following accusations of Human Rights violation emanating from amongst others, the repatriation of Sisiku and other Cameroonian refugees.

The presence of a representative from the Nigerian government at the Yaoundé military court thirteen (13) months after the arrest and extradition of the Anglophone leaders is a clear fact of the impact the case has on the upcoming elections, Chinwe Peter, a political pundit in Lagos who has been following up the matter, told National Telegraph.

On Friday, January 5, 2018, Sisiku Ayuk Tabe and nine members of his retinue were reportedly arrested at the NERA Hotel in Abuja, Nigeria and extradited to Yaoundé, Cameroon, an incident that has been described by Human Rights crusaders as illegal and in total contravention of International Laws.

They’re currently facing trial for Terrorism amongst other crimes the Cameroon government is accusing them of. Sisiku is considered by over 95% of the population of the North West and South West Regions as President of the Federal Republic of Ambazonia, a new country that they’re fighting to create.

Armed groups have emerged battling with pro-regime soldiers as they aim to uphold the creation of this new country that’s outlawed to the Cameroon government.

The Biya administration has blamed the insurgency on Sisiku and others. However, the defendants have denounced their Cameroonian nationality, insisting that their actions are within International Law.

Pressure is mounting on both Nigeria and Cameroon to ensure the Refugee Rights of the arrestees are respected. The defense has now obtained documents from the United Nations High Commission for Refugees to defend their statuses. 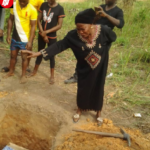 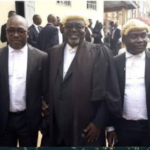