‘Operation Three Years Jotna’, a pressure group that was formed last year as a movement that aims at removing Gambian President, Adama Barrow from office has extended the date, allowing Adama Barrow to rule until January 19, 2020.

The Movement says its aim is to remind Barrow of his commitments to the coalition team by organizing a ‘peaceful’ demonstration from Serrekunda to the capital city, Banjul.

A formal letter signed by the movement’s chairman has been sent to the Inspector General of Police requesting the permission of the security forces to stage a ‘public procession’ next month – December 16 to demand President Adama Barrow to step down.

It has now emerged the group will hand President Barrow borrowed time of one month to leave State House, which will officially mark the end of a three-year term.

Should the president refuse to step aside, the group plans to stage a protest to demand he leaves office, a protest that will be different from the December 16 procession, National Telegraph has been told.

“We wish to start the procession from Westfield Junction, Serrekunda to the State House gate, Office of the President, and Banjul between the hours of 10 am to 5 pm. Upon arrival in Banjul, we would deliver a petition to His Excellency the President of the Republic,” the group said in the letter to the IGP. 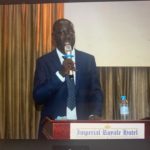 Percentage Of Uganda’s Ne’er-do-wells From UBOS’ Report Is Shocking!

Facebook Will Face Stiff Competition From Samochat In Somalia.