Home » Pastor Arrested, To Face 7years In Jail After Preaching On COVID-19.

Law enforcement officers in Uganda have arrested a pastor. The Ugandan pastor Augustine Yiga, locally known as “Abizayo” is liable to spend seven years in prison if convicted.

“Abizayo” is a Luganda word literally meaning “I resend them back” which means that he has powers to send back the hindrances faced by flocks to the originator or sender, hence the name ‘Abizayo pastor’

Yiga was arrested on March 27, by Police at his Revival Christian Church, Kawaala in Kampala after being filmed on the church TV station, ABS Television, saying that there is no Coronavirus in Uganda and Africa.

This prompted police to intervene and he was arrested on account of uttering false information and spreading harmful propaganda in relation to the COVID-19 pandemic.

Yiga appeared before Nateete Grade 1 magistrate, Timothy Lumunye on March 30, on charges of false utterances. Yiga denied charges and was remanded back to Luzira Prison until April 30.

Upon conviction, Yiga will be remanded for seven years. His utterances contravene section 171 of the penal code act; laws governing criminal charges in the country.

The law states that ‘any person who unlawfully does an act which he/she knows or has reason to be likely to spread the infection of any disease dangerous to life commits an offense and liable to seven years imprisonment on conviction. 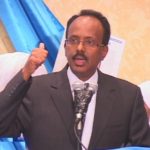