The President of Sudan, Omar al-Bashir has made a gesture on the occasion of the International Women’s Day, Friday, March 8, 2019, that has further exposed Cameroon’s President, Paul Biya, 86, as the World’s greatest Dictator.

Omar al-Bashir has ordered the release of all women arrested in connection with anti-government demonstrations. Since December 19, 2018, Sudanese have been protesting against general price increases and cash shortages in the country, National Telegraph has been told.

Reports say the women are amongst protesters arrested in Omdurman, a city near the Sudanese capital of Khartoum. Others were also arrested Burri, Khartoum, other cities, National Telegraph has learned.

However, a statement from the Presidency has confirmed that on Friday, the President instructed the head of the security and intelligence service to release all women who were detained in line with the protests.

Meanwhile, in Cameroon, President Paul Biya instead ordered that women arrested in line with peaceful protests be transferred to maximum security prisons, including Michèle Ndoki, a famous female Rights Lawyer.

Kamto had challenged the results of the Presidential Elections at the country’s Constitutional Council after he considered himself the winner.

Kamto would later call for a peaceful protest before the regime opened fire at protesters, wounding some and arresting many others, including women.

President Paul Biya posted a message on his official Twitter account where he talked of amongst other issues, to improve the level of participation of women in political, economic, social and cultural life.

Ironically, Michèle Ndoki was finally sent to a maximum security prison in the country’ s capital, Yaoundé on the eve of Woman’s Day for only trying to participate in the political life of the same country President Paul is talking about.

Many women, both young and old have been raped, killed and others burnt alive by Cameroonian soldiers at the behest of Biya in the two English-speaking regions, eyewitnesses have said.

Most women of these two regions grouped under the banner of the South West and North West Women Taskforce boycotted this year’s International Women’s Day stating that their proposals for an end to the deepening Anglophone crisis have gone unheeded.

There’s a deepening armed conflict that has broken out in the two English-speaking regions with Anglophone Militias battling regular army to create a new state called Ambazonia.

“We can’t be celebrating and feasting with all the agony in the country. I propose all women should on that day rather be dressed in black (not the usual wrapper) to show their disappointment and anger”,
Kah Walla said. 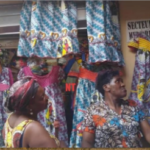 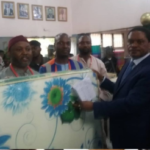 Paul Biya why you don’t read God’s word? don’t you know that Jehovah God hate partiality? we are one people created from the same creator, why all these cruelty between your own people in Cameroon. Rather women right, Anglophones and Francophones. We are one blood and one African from the same mother. Is this the reasons why your people elected you? The world is watching you, and our God is watching you most. Take it easy and settle your people in your country.

Paul is quite long known as the cabal, super power of hooliganism and motivator of human destruction in Africa. But, I’m surprised that people are still supporting him in his devilish ways of killing and brutalizing human beings in his country instead of protecting them! He won’t live forever, one day, he’ll leave everything and die and go to the land of the dark to suffer for his evil deeds.

Does Biya even acknowledge that he once lived inside of a woman for nine months? Does Biya even know that
a woman gave birth to his children?

It is really very difficult to be a woman. It”s so sad that women have to give birth to creatures like Biya and his BIRs, very sad. Look at how they beat women, shot at them like animals, kill their children, … Devils in human bodies.

And we have women that run around with such lowlife creatures and call the husbands.