Home » This Is The Full Statement Of Donald Trump’s Envoy As He Visits Cameroon’s Paul Biya!

A top United States envoy who is visiting Cameroon, a Central African country wrapped in an armed conflict at the behest of Donald Trump, United States President has met with Paul Biya, the country’s President, National Telegraph has learned.

The Assistant Secretary for African Affairs, Tibor Nagy, met with Paul Biya at the Unity Palace, the official residence and offices of the Cameroonian President on Monday March 18, 2019, accompanied by Peter Henry Barlerin, the U.S. Ambassador to the Republic of Cameroon a source has confirmed to National Telegraph.

Tibor Nagy issued a statement after meeting with President Paul Biya dated Monday 18 March 2019. Below is a full text of his statement;

“Diplomatic conversations are always confidential. You can rest assured that our discussions were frank, honest and direct. We each expressed our points of view. I greatly appreciate the President’s knowledge and wisdom.

The U.S. and Cameroon have so many interest in common. Me like your government, we want what is absolutely the best for the people of Cameroon.

You have a very young population. In the future, they will need jobs. I will like to bring many more investors to Cameroon. We all want the young people of Cameroon to have the best jobs possible. I think American investors will bring very many positive qualities.

Our government, President Donald Trump is also very interested in having much more investments and trade with Africa. For me that is a personal campaign too.

American investors require certain conditions. We would like to encourage the country to go in that direction.

So we will do our best, but we all want the exact same thing – a very prosperous, peaceful and stable Cameroon, which will be the absolute best for its people.”

The Assistant Secretary for African Affairs also visited Crelicam, an Ebony Processor owned by American guitar maker Taylor Guitars. The diplomat is expected to end his visit to Cameroon, Tuesday March 19, 2019 with high level talks with the US Ambassador to Cameroon and other US Embassy staff in Yaounde, Cameroon’s capital. 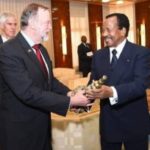 Has he been given meat in his mouth so he can’t talk also? I doubt if this man from USA knows what is at hand.Congratulating boys is like telling him to go ahead and kill all of us in the two anglophone region.