A top military official in Cameroon has died, military sources have told Telegraph. Benoît Asso’o Emane, 82, died Thursday January 17, at the CNPS Hospital in Yaounde, Cameroon’s political capital where he had been hospitalized for over two weeks.

Benoit Asso’o Emane was Commander of the Yaoundé Military Headquarters. Military sources say his death had earlier been announced on January 7 but was later debunked by family members. Benoît is famous for standing directly behind President Paul Biya in one of the President’s many pictures.

He was born on June 21, in Essong, a village in the South Region of the country. Benoit joined the then French Army on November 6, and later moved to the War College in Yaoundé where he graduated as Lieutenant in 1961. He’s one of the key actors who foiled the 1984 coup in Cameroon. 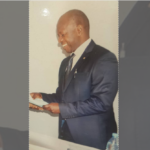 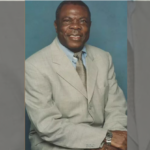 Nope, he only came out of hiding when the rebels were neutralised. Some unspoken brave men did the work and he claimed or was given the glory!