The Director of Administration and Finance at the Ministry of Health, Mohamud Mahmaed Buulle over corruption-related issues.

Mohamud Bulle has been charged with embezzling funds donated by foreign organizations to curb COVID-19, National Telegraph has confirmed.

Health Minister, Fowsiyo Abikar Nur has confirmed the arrest and demanded the relevant authorities to clarify the reason behind the jailing of the Director of Finance at the Ministry of Health.

Shortly after her demand, her Director-General, Abdullahi Hashi was also taken into custody by the police over corruption-related allegations.

According to reliable sources interviewed by National Telegraph, there are also other officials from the Ministry of Health that are being chased by the government.

Somalia reported two more cases of Coronavirus on April 3, bringing the overall cases to 7, according to the Ministry of Health.

This comes while the health care system in Somalia remains weak, poorly resourced and inequitably distributed.

Health expenditure remains very low and there is a critical shortage of health workers. Some days ago the U.S. announced it will provide $7 million to help Somalia deal with the COVID-19 outbreak.

The Intergovernmental Authority on Development (IGAD) has handed over $100,000 to the Somali government to respond to COVID-19.

Somalia is ranked the world’s most corrupt country, according to a 2019 report from Corruption Perception Index (CPI) released by Transparency International – TI. 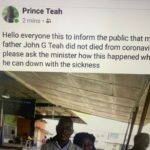