Ugandan President, Yoweri Museveni said, Friday August 14, 2020, he is saddened by demolition of an Anglican Church in Ndeeba, a neighborhood in the city of Kampala, Uganda’s capital.

Museveni dubbed the perpetrator, unscrupulous and gave the church assurances that those complicit will be punished.

“Even if the church was in the wrong, ordering demolition was extreme. Dialogue would have resolved this matter,” Museveni said in a statement, Friday.

The President said he was on site at the St Peter’s Church. “On my way to work this morning, I passed by the site of St Peter’s Church in Ndeeba that was recently demolished by unscrupulous people,” Museveni said.

The President also said judges should have limits and understand public interest. “Demolishing a church is a curse,” he said. He also urged that people ignore reports of those claiming the government demolished the church.

Salim Saleh dismissed these claims on Wednesday August,12, 2020, while addressing the House of Anglican Bishops. “In the name of God. I want to swear to you that I am not involved in breaking churches… That is crazy for one to think that Saleh can break a church. Those saying so don’t know me,” Gen Salim Saleh said.

Salim Saleh who is the Chief Coordinator of Government program, Operation Wealth Creation, aimed at transforming agriculture from subsistence to commercial told the Bishops he had no interest in the church.

Museveni has now said he is going to invite the Namirembe Diocese Bishop, the Rt. Rev. Wilberforce Kityo Luwalira, and engage with all parties involved in this conflict to find a lasting solution.

“The bottom line is that the Church will retain this land and we shall build a new church. I have now joined this war,” Museveni assured the church.

The president also lamented on noticing large groups of people gathering in Ndeeba as he inspected the site. “This is wrong. Avoid crowding in light of the Covid-19 pandemic that we are grappling with,” he warned.

The Archbishop of the Anglican Church in Uganda Bishop Stephen Kaziimba Mugalu with other 36 bishops on Monday, August 10, 2020, held prayers at the demolished church and vowed that the Christians will rebuild the church. 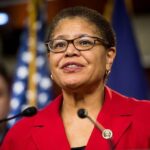 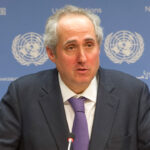