The Archbishop of the church of Uganda warned against the issues of gay rights, saying they have no place in the Church of Uganda, National Telegraph has gathered.

Archbishop Samuel Stephen Kazimba Mugalu, who was consecrated on Sunday, March 1, 2020, said in his tenure in office, the church will not tolerate the issues of gay rights.

On his first tenure in office as an Archbishop of the Anglican, Church of Uganda, Kazimba said the church will continue advocating for heterosexual marriages, (marriage between one man and one woman) for procreation according to the teachings of the bible.

“The trend in the Western World and some Anglican churches in those contexts are being pressurized into this, including our mother, Church of England, but for us Uganda, as for me and my house we will serve the Lord,” Kaziimba said in his first speech as an Archbishop.

Kaziimba is not the only religious leader who has spoken against homosexuality and gay rights in Uganda. Archbishop Stanley Ntagali, while bidding farewell to Christians at All Saints Cathedral Nakasero the week before said, the church will not be intimidated by Western powers into accepting same-sex marriages.

“We cannot follow the teachings of liberals of the West, that the bible is the book of the past, and that men can marry men, and women can marry women, we are saying no to those liberal teachings, we have said no to same-sex marriages and we shall continue to say that until Jesus comes back,” Ntagali said.

Kaziimba also said that he disagrees with the idea of promoting abortion as a birth control method. Pastor Benjamin Nebechuku on Sunday while delivering his sermon asked the congregation to do away with homosexuality and wondered what a person would look for in same-sex.

“What would a man look for in a man, it is spiritually wrong and culturally an abomination,” Nebechuku said. Kaziimba pledged to implement a wide-ranging transformation vision for the church over the course of his tenure.

The enthronement attracted a number of Christians from the Anglican community as well as political leaders including Uganda’s President, Yoweri  Museveni, the speaker of Parliament, Rebecca Kadaga, the Prime minister of Uganda, Ruhakana Rugunda and many other cabinet ministers.

Archbishops at the event included Archbishop of Canterbury and Primate of all England, Justin Webly, Uganda’s Seventh Archbishop Henry Luke Orombi, and head of Anglican Church in Rwanda. The enthronement took place at the provincial church, St Paul’s Cathedral Namirembe. 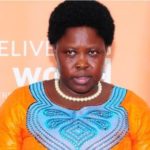