Makerere University students, a state-run University in Uganda’s capital, Kampala have made a research initiative that is promising to make a breakthrough in the fight against plastic waste that liters most of Uganda’s urban centers.

The research team of 15 students is led by Alex Kyabarongo has identified bacteria that degrade plastics. The bacteria are known as Ideonella sakaiensis naturally decompose a component in plastics called polyethylene terephthalate (PEP).

According to Kyabarongo, team leader of the Makerere Internationally Genetically Engineered Machine (iGEM) team, they have been inspired by bacteria with a unique ability.

Kyabarongo participated in iGEM competition when thousands of students across the world gather to discuss synthetic biology in Massachusetts, Boston, USA in October 2018.

The team was given a grant worth $2,000 by Promega, a company in the US that manufacture enzymes and other products for biotechnology and molecular biology with a portfolio covering the fields of genomics, protein analysis and expression, cellular analysis, drug discovery and genetic identity to procure Promega products, on top of $5000 for registration fees to participate in iGEM competition.

However, the team requires $20,000 (Sh73m) to undertake further research. “We getting the gene from Ideonella sakaiensis bacteria, and grow it from the local bacteria, E. coli to see how it produces enzymes that feed on plastics,” Kyabarongo said.

“We need funds to purchase reagents and chemical kits that stimulate the bacteria to produce more proteins that feed on plastic as well as adding on our research and incubation,” Kyabarongo said.

The students believe the project is a cheap, hassle-free method of dealing with the large amounts of plastic polluting and yet environment-friendly innovations project.

“Uganda’s land pollution is poor plastic dumping,” Kyabarongo stressed saying that most people handle plastic waste careless by burning. “We are looking at how we can degrade the plastic without burning,” said Kyabarongo, adding that this will provide a solution to land and air pollution.

Kyabarongo said their project has been stalled since the group has lacked funds to purchase genes and reagents to use in synthesizing the genes in the laboratory to produce proteins that feed on plastics.

How The Bacteria Work.

Students discovered the bacteria that eat plastics in Japan in 2016. The bacteria have the ability to degrade plastics. This particular bacteria that release the enzyme known as PETase is not available in Uganda.

This is similar to what the students at Makerere are seeking to manufacture. Unlike the bacteria made in Japan, the bacteria being made by Makerere students will be able to survive in Uganda’s conditions. The enzyme splits certain chemical bonds in plastics, leaving smaller molecules that the bacteria can absorb.

The bacteria survive under normal temperatures of 20 ºC to 35 ºC in a period of three weeks, according to the team’s instructor, Dr. Boniface Okuni, and a senior pathologist at the College of Veterinary Medicine and Animal Resources at Makerere University.

In addition to Okuni, Geoffrey Otim, a veterinary lecturer at the School of Veterinary Medicine, Makerere University is an instructor supporting the bacteria team. “Any discovery comes from existing research, this bacterium Ideonella sakaiensis that feeds on plastics was only discovered in Japan in 2016, but for our case, we are manufacturing bacteria that have the same abilities to feed on plastics,” Okuni said.

The team is going to establish whether the bacteria, Ideonella sakaiensis, survive in both cold and warm temperatures. Makerere’s IGEM team is going to genetically modify the locally prevailing bacteria (E. coli) in Uganda so that it can produce the PETase enzyme that breaks down the plastics.

The engineered E. coli bacteria with the genes, the enzymes produced are able to express the plastic-degrading abilities. “The project requires funds to purchase chemicals and kits to grow the bacteria that feeds on plastics and draw conclusions on controlled experiments to study its effects on soil, environment, and temperature”, Okuni noted.

The team when scooped $2000 grant from Promega in May last year, purchased basic products such as agarose, barrier tips, ethidium bromide, DNA ladders, buffer, and competent cells and started on the execution.

The team in September still lacked some of the necessary supplies, with one month left to participate in a competition in Massachusetts Boston USA in October 2018 in iGEM Giant Jamboree, having assembled what they had.

“We got the bacteria (E coli) already; we want to carry out testing in the laboratory. I wanted students to do experiments on real-time trial but the students are stranded,” Okuni said, adding that nothing else can be done because they are financially bankrupt. 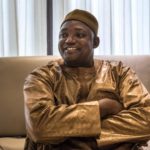 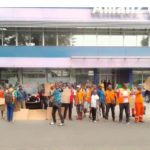