Tafon Ndi Nchukwi, 25, a US fighter originally from Njemba Mankon, a village in Bamenda, a town in the North West Region of the Central African country of Cameroon has dedicated his last three victories to ‘Ambazonia’.

The Mixed Marshal Arts (MMA) winner confirmed to National Telegraph his victory last night Friday November 22, 2019, at the Joint Base Langley-Eustis in Hampton, Virginia was not his third victory but was the third dedication to Ambazonia.

Tafon Ndi from Temple Hills, Maryland beat William Knight from Manchester, Connecticut in Heavyweight in Friday’s fight. Tafon first dedicated his victory to Ambazonia on Saturday June 8, 2019, at Foxwood Resort in Mashabtucket, Connecticut when he won the Lion Fight Promotions.

On Saturday November 2, 2019, Tafon made his second dedication when he knocked off McCowin in nothing above 2mins and 50seconds at the first round of a Cruiser-weight fight at the Royal Farm Arena in Baltimore, Maryland.

Other Tafon’s victories include one on March 2, 2019 in the Mixed Marshal Arts (MMA) at the Parx Casino in Bensalem, Pennsylvania, where he won his first professional fight.

Tafon also started an amateur career five years ago before becoming a professional, during which he fought in many places including; Italy, Thailand and all over USA.

He has also represented USA in MauyThai organised by World Kickboxing Association (WKA) in 2016 for MauyThai and K1 and won both titles.

Speaking to National Telegraph early Saturday November 23, 2019, Tafon said he enjoys carrying the Ambazonia Flag. When quizzed on the reason, the fighter said it was for his people.

Tafon explained that he followed on social media on how the Cameroonian government is killing his ‘Ambazonia People’ and with his relatives back home calling and reporting the carnage of the Cameroon soldiers, he felt obliged to act.

The fighter continued that since he couldn’t go back home to defend his people, he thought he could use his highly-watched fights to showcase the Ambazonia Flag and tell the world his people have a right to self-determination.

Ambazonia is a name used by armed groups and political activists for Cameroon’s two English-speaking regions where there’s an armed conflict with a demand by majority of Anglophones in the North West and South West for a separate state called Ambazonia.

This crisis has led to thousands of deaths, torching of hundreds of villages, millions of displaced people and thousands of political prisoners. Tafon carries the flag in recognition of the right of self-determination of his countrymen and women. 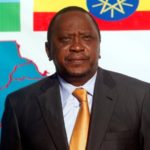 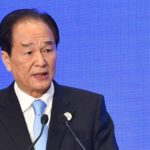