The United States has announced, it’s banning a top Cameroonian Military official and wife from entering its territory, National Telegraph has confirmed.

The spokesman of the US State Department said in a statement, Tuesday July 9, 2019. Colonel Jean Claude Ango Ango and wife, Engono Akomo are by the statement blocked from ever entering the United States.

The statement says “The Secretary of State is publicly designating the Republic of Cameroon Inspector General of the Cameroonian Gendarmerie, Colonel Jean Claude Ango Ango, due to his involvement in significant corruption related to wildlife trafficking.”

The Cameroonian official and wife have been handed the sanction under Section 7031(c) of the Department of State, Foreign Operations, and Related Programs Appropriations Act, 2019 (Div. F, P.L. 116-6) (“Section 7031(c)”). Section 7031(c), parts of the statement suggests.

The above mentioned legal instrument provides that in cases where the Secretary of State has credible information that officials of foreign governments have been involved in significant corruption or a gross violation of human rights, those individuals and their immediate family members are ineligible for entry into the United States.

The law, the statement says also requires the Secretary of State to publicly or privately designate such officials and their immediate family members, reason why the official’s wife is also affected.

The statement concludes that; “Today’s action sends a strong signal that the United States is committed to fighting corruption and combating the transnational crime of wildlife trafficking to preserve our world’s iconic species.

The United States Department of State, commonly referred to as the State Department, is a federal executive department equivalent to the foreign ministry. 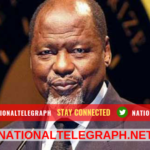